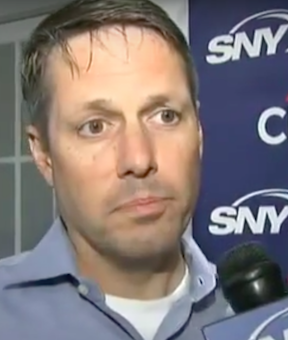 The Mets’ 4-2 loss to the Braves Thursday could be viewed as “another day, another loss” in a season of promise that devolved into a disaster at stunning speed, even for them. But with each passing day, it grows clearer that the solution to repair what ails the club cannot come from inside the organization. For the duration of Sandy Alderson’s tenure as general manager, assistant GM John Ricco was rightfully viewed as his heir apparent. He preceded Alderson with the organization and his private sector resume largely mimics Alderson’s when Alderson was plucked from a law firm that was representing the Athletics and, with no baseball operations experience, was named the club’s GM. Ricco is also an attorney and worked in the MLB commissioner’s office before joining the Mets.

The transition would have been relatively seamless and moved forward whenever Alderson decided to leave had the Mets not disintegrated in consecutive years as they did in 2017-18.

Alderson has left the club, ostensibly to treat his recurrence of cancer. Seated next to Jeff Wilpon at the press conference to announce that news, Alderson himself essentially said that if it were up to him, he’d fire himself for the club’s downfall following their 2015-16 postseason appearances. So, Alderson is out and not returning. In his stead, they have a tri-head GM of Ricco, J.P. Ricciardi and Omar Minaya. This is unworkable in the short and long term. With clubs looking to deal with the Mets not knowing whom they should call and how long it will take for them to reach a consensus, the team is in stasis. Since the Mets made their highest value targets – Jacob deGrom and Noah Syndergaard – off-limits barring a loony offer, the changes they did make are cosmetic.

The biggest problem for the Mets has morphed from the appearance of disarray to actual disarray.

On the bright side, the Mets are somewhat lucky in that they’re getting an in the trenches view of how Ricco would function as the fulltime GM. That trial run as the club spokesman and potential final decision maker is not helping his case to be given the job. With every press conference in which he serves as the organizational front man, he goes from “the guy whose voice we never heard” to “the guy whose voice we hope to never hear again.” It’s irrelevant whether he’s been a competent and evenhanded voice behind the scenes. He lacks the infectious personality that will automatically make it seem like he at least has a plan and believes in it and can get others to follow him. It’s clinical. He sounds like a doctor telling a patient that tests reveal a sexually transmitted disease. That is not going to work, especially in New York and specifically with the Mets.

Part of the search for the new GM goes beyond any blueprint he or she presents in an interview. It must be a person who can be sold to the fan base and media simply by mentioning the name. Listing potential names is generally a waste of time and more of a function of market research than anything else. Hiring a person who seems to check all the boxes and serves to placate the fans and media is not enough of a reason. Mickey Callaway has proven that.

Alderson is being blamed for the roster construction and the perceived dilapidation of the organization in general, but Ricco and Ricciardi were present and had a significant amount of sway for the entire time Alderson was there. Minaya was the GM who oversaw the rise and fall of the Mets from 2005-10. Can any one of the three make a case that he is the one who should be entrusted to fix this?

This goes beyond picking a new GM who is salable to the fans and has a background and clearly delineated plan. Because they have already stated their intention to contend in 2019, a new GM who might have wanted to trade away deGrom, Syndergaard and any other player of value to boost the farm system, clear some salary and reboot has already been told before interviewing that there will not be a rebuild. Right there, it puts a potential GM at a disadvantage as he will be walking in with parameters and residue from past failures rather than a clean slate.

Wilpon is another issue. He trusted Alderson enough to leave him alone as much as Wilpon leaves any of his underlings alone, but he had two decades of experience in the game from about every perspective a front office person can have. He’d earned the benefit of the doubt. While Ricco is liked within the organization, the first instinct Wilpon will have is to tighten his grip, not loosen it. Add in Ricco’s poor showing thus far as the team spokesman and it cannot work.

The beneficial aspect to the Mets slide toward what will be close to 100 losses is the urgency to act and willingness to change. It will spark the necessary action of hiring a veteran baseball man with experience and flexibility to adapt. Working the owner is part of the job. With none of the three current baseball men running the club capable of doing it, it is vital they find someone from outside – someone to be the baseball CEO; someone who knows what the hell he’s doing.